Decided to fit this one in as I just wasn’t feeling competitive and in the right head place on the last triathlon and felt I would be letting myself down if I performed like that on the qualifying events after all this hard work and time away from family.  Dave agreed it was a good idea and so did Ian.

Arrived, lots of parking considering there were 270 starters.  Good changing rooms.  T1/2 on grass so a wet day would be pretty muddy but hottest day of the year so no problems.  I went off to do a warm up super pleased with that.

Went into the changing rooms to go on poolside and saw a lady being brought in who had crashed on her bike, she didn’t look great.  On the recce there were 3 places I was concerned about, turns out the bend she went off on is one I had identified as being dangerous!

Lap counters seemed to be on top of things which was a good sign.  I was pretty focused to be honest (a tad nervous but that’s ok I wasn’t shaking like I do sometimes).  I wanted to time my own swim so took a cheap watch to record the swim time as I’m annoyed with myself that my swim isn’t better.  I got in and worked out by the time I had to set off two other women were going to be just in front, shame.  3s count down and I was off. I caught the ladies up on the first and second lap so had the rest of the lane ahead to myself.  Kept in control of my breathing so I wouldn’t stress myself but made sure I kept my arm rotation going and not ease up. I knew I was on my last 2 and the board went in which was a nice confirmation.  I tried to go a little faster without raising the HR.  All good.

Took a little time as I wanted to wear my gloves as I feared coming off the bike and glasses for the sun.  I had my gels in my front bag this time rather than back pocket and one drink on the bike.  Made a mistake getting on the bike but no ones perfect, right?!  Oh yeah, later found that I had two fingers in one glove hole and none in another – made me laugh on the bike. 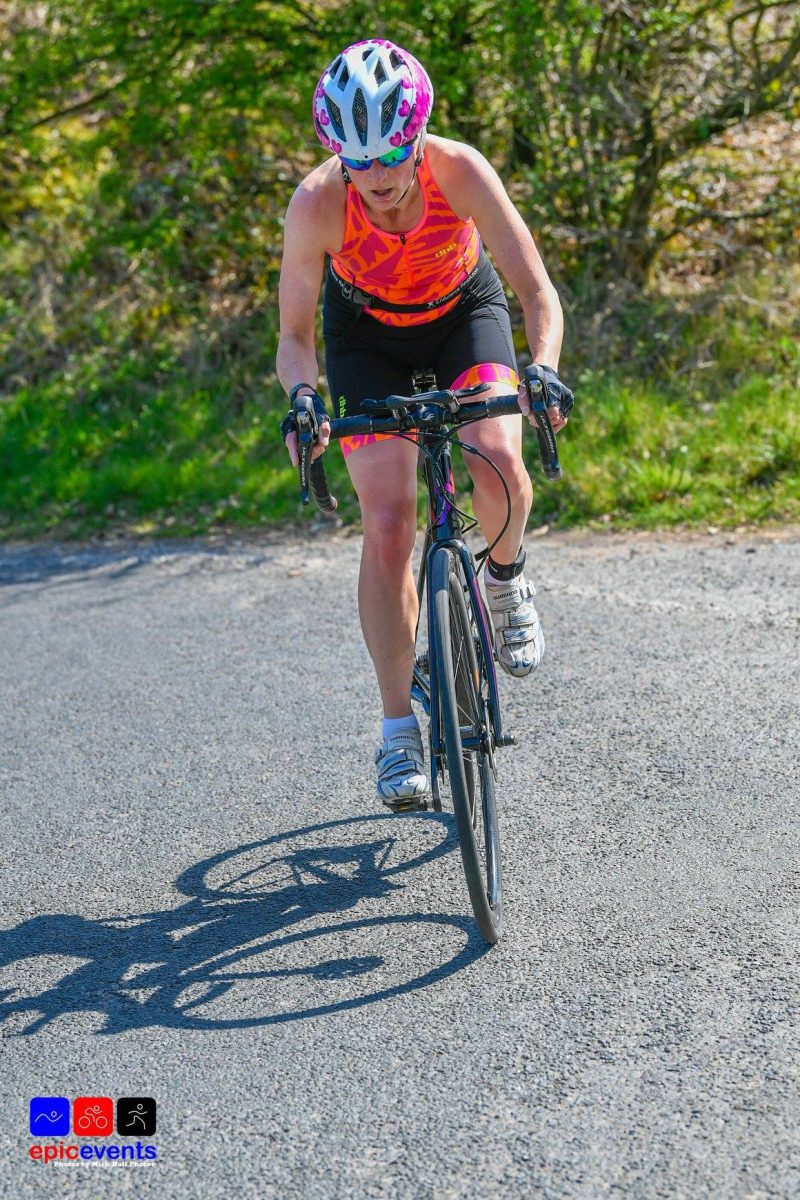 Planned not to go out too hard to start with but have to admit I did feel a little stressed.  Kept watching the clock ready to get the first gel in by 10mins, couldn’t think of anything else until I managed to get that down.  Kept spinning away up and down the gears and could see another woman ahead sometimes felt like she was getting away then it felt I was catching up.  I had to catch her.  A chap (not in the race) came from a side road extremely fast staying ahead and at this point it was the slight uphill before getting to house on left with a couple of bends then a fast flat, downhill and into the Bird Hill.  I did feel like I was cycling backwards at this point and getting a little annoyed with myself.  “Come on Jo your better than this” telling myself off worked and I soon started to work harder.  Got caught up with some cars slowing on the downhill before the right hander to Bird Hill but ok I had to slow there anyway and it was one of the turns I was concerned about so fine.  I looked up the hill and watched people grinding away up the hill, it has such a negative impact on me I had to look down at the tarmac before my confidence dropped.  I just watched the tarmac with an odd look up and span the legs best I could.  My bike actually likes going up hill.  I had to go into granny ring which I didn’t on the recce but I conceded that was ok as long as I span the legs.  I overtook 4 people up that hill.  I saw the very top knowing that I was over the worst bit but then I looked up and saw another long hill – oh crickey I thought I was at the top and had forgotten there was another hill!!! Oh no I hoped I hadn’t just wasted myself getting up the big hill to fall at the next hurdle.  I clicked up another gear as it wasn’t as steep and dug in to spin to the top, after all it was all downhill then and I was going to have my next gel once I hit the top.

Down the hill and real caution into the left hander which was full of sand on the inside and grit right in the middle, thankfully I checked there was no cars coming so all ok.  Glad that was over.  Surface was now rough for a mile or so with a couple of sharp short bends with no room for error but I felt confident I would slow and take it careful so all ok.  Now the section is just fast as your legs can take you to the finish.  I kept trying to stay down on the aero bars for a few minutes at a time.  Towards the last section my lower back was starting to hurt so a lot of moving about but all ok.  Found another gear and the bike almost launched forward, I couldn’t believe it, “yes, come on lets go” I started to feel great (apart from the back) and was enjoying it.  Calfs had a tingle or two and I had finished my drink so it did occur to me on such a hot day going longer I will need two bottles.  A couple of inclines before the finish feel like taking a bit of an effort now! Into T2 and happy to have a break.

Fairly fast in and out.  Took inhaler with me just in case. 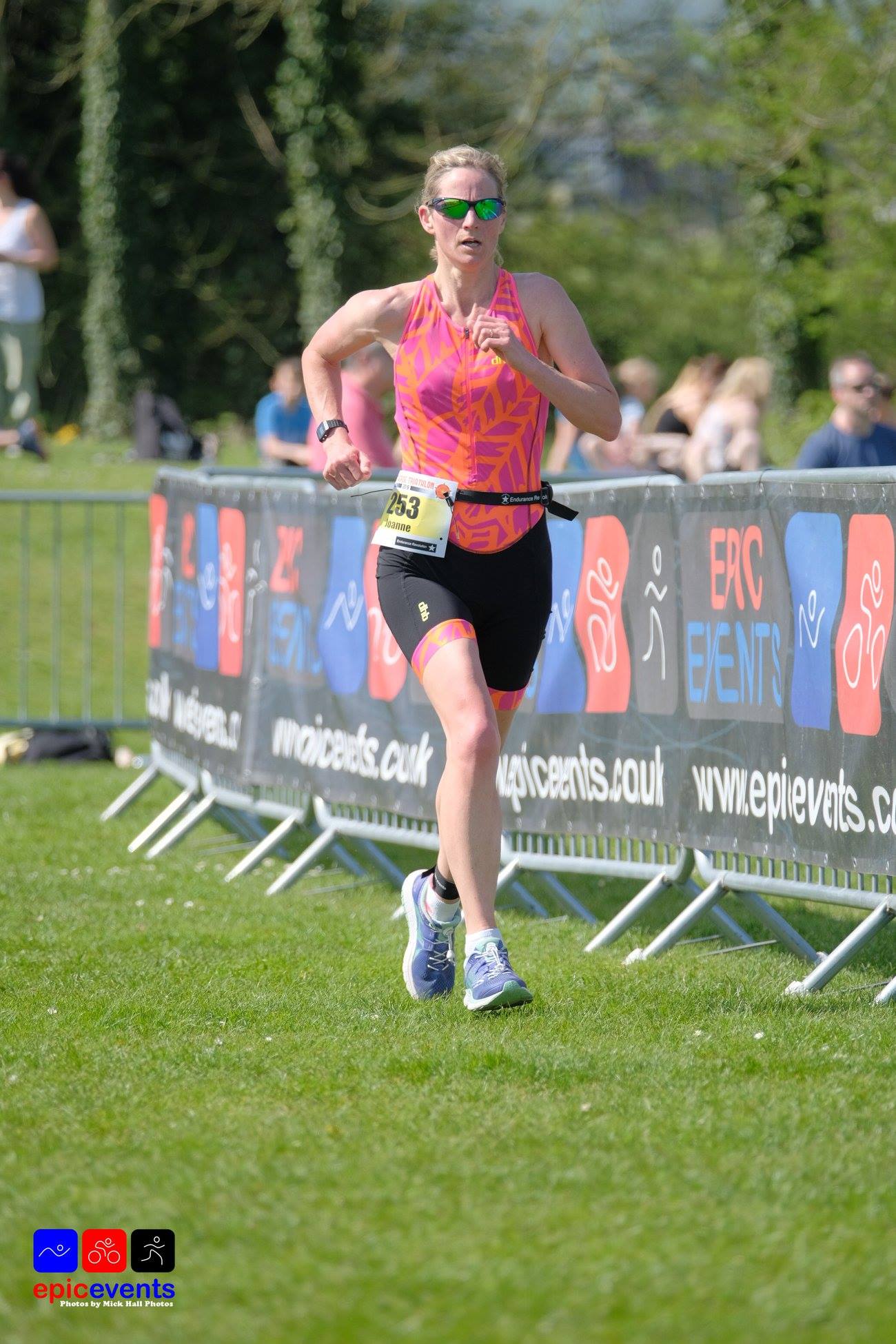 Legs felt tight pretty early on.  First hill and wow I felt tight.  I decided I could probably walk up faster than run so I allowed myself to fast walk for about 20yards.  Eased into the run because of the legs and my chest started to get tight too.  I needed a distraction so I didn’t concentrate on the tightness.  I concentrated on the woman in front and hoped she wouldn’t get too far ahead.  I then started to see people coming back and the women were walking, struggling and looked knackered, I really felt for them.  So, I decided to high five them to give them some encouragement to keep going, it seemed to work and they were laughing, it also took my mind off of my burning tightening chest.  But by the sixth woman I started to realise this high fiving was putting me off my stride and I probably shouldn’t be doing it – what on earth would Ian and Dave think! So mind back on me I realized the chest wasn’t going to get better and figured I should use this event to have a go at inhaling whilst running as no way did I want to stop.  By now I was wheezing, shaking the inhaler I got ready and took the two puffs, what a relief I could feel the airways opening up down to the tummy.  Right then I’m good lets get on with this.  I then broke the run down into 4 sections each 2km, I’d reached and puffed away at 2km mark next would be the turn around point, back to the village and to the finish.  My body was feeling a little tired after the 6km mark and I had to work at keeping upright and not collapsing/sinking into the hips as that’s hardwork when that happens.  I was feeling good. The hardest part would be up the grassy bit and over the tree roots so needed to concentrate over them and not fall!  Into the final run shoot and I had nothing left to go much quicker but that’s ok, its finished.   Husband and daughter waiting for me as ever which is lovely.  It was so hot I had a bottle of water over the head and down the body and drank the next.  On the last event I had watched the elite ladies go for a cool down so I gathered my friends and we had a bit of a jog round the field and did some stretching – this was a good move and something I will look to do in the future.

3rd age group and 9th overall lady – flipping heck I’ve done alright haven’t I!!  Most of all I was so pleased that my positive head was with me.  During the entire event I talk to myself, think of the words from Ian, Dave, Sandra and Jill and picture my daughter’s excited face.  I’m so lucky to have such great support.  I now think I’m ready to tackle the next block.