So a message from fellow coaching chum and GB long distance triathlete Kath Finn “Fancy the Strathpuffer?”  Two of our team are injured, its mid January and an 8 hour drive north, I’ve a farmhouse booked either side of event, tent, mechanic (hopefully) gazebo…..an opportunity not to be missed!

This was not the first time that this event had appeared on my radar and having not done much endurance MTB recently and just having had a hernia op I thought this seemed that the perfect chance for a mid month mini break with a group of like minded gals and something to focus on training wise in the far north east of Scotland!  So I said yes and found our final team mate in the shape of Kirsten Civil another experienced coach and MTB rider, oh and not forgetting our team masseuse, chief tea maker and feeder Becca Humphreys owner and founder of https://eye-bex.com/

When it comes to mountain bike challenges, they don’t come much tougher or more rewarding than the Strathpuffer – the legendary 24 hour mountain bike endurance event held every year in the Highlands of Scotland in the middle of winter

One team training ride and a brief meeting to decide who was going to gather ‘what kit’ and we were packing up and setting off on the Thursday evening on the 258 mile trip.  Never seen so much kit dissapear into the back of my Ford Transit:

Only a 6 hour run up with lovely quiet roads and just 1 change of driver at Kingussie as we reached Contin just before midnight.  Settled into the most comfortable cottage we all slept well and Kath kindly brought us coffee in bed before we rose and looked out at the stunning snow topped hills and bright blue sunny skies.   It felt like I was in the Alps just about to go skiing but alas just about to take on the 1st 24 hr MTB of my life with a group of gals who had never raced together before.  We had decided all we wanted to do was get round in one piece and be smiling at the finish!

Friday morning after unpacking van and a brief faff with kit we headed down to the village of Strathpeffer to get in the long queue for registration, an hour and a half and several cappuccinos later we were all done and dusted so back to the farm house to load the van with all the kit we needed to take to the race start. Less than a five minute drive and we were pitching gazebo and tent, installing mobile bike wash, filling numerous 20 L water containers and our team mechanic prepping his patch. Leaving the van there we cycled back to the farmhouse and enjoyed a lovely meal together before getting an early night. The decision had already been made that I was going to be first on the grid so we decided to get down there in good time around 8 o’clock ready for the 10 am kick-off. Kirsten headed up the fire track with ‘Frank’ my 29er plus Trek Stash freshly serviced by my big brothers who also have the same awesome bike. I walked back down to the start line skipping over the icy sections of fire track praying that I would not be the 1st to face plant during the sprint start up the hill for our bikes.

So the first lap involves quite a lot of queueing dismounting and figuring out which bits weren’t icy but in fact grippy and safe to ride. A whole new phenomenon on riding skills that came into play here. Less than a mile before the end having ridden all the technical stuff I relaxed a little too much and suddently hitting the deck on the left hand glutes/hip OUCH, jump back on, pride slightly dented, half an mile further down another lovely sweeping bend it didn’t look icy however a bit too much lean and speed and BANG this time right shoulder BIGGER OUCH. (you can tell I am not used to falling off!) Back on safely to the finish and just need to tell Cath to look for the grippy lines (you don’t need to mention anything about falling off at this point) see how she gets on the first lap and then keep keep feeding bits of information as necessary.

In between our laps as a team of 4 we have plenty of time to change into something warm and dry and fuel up as it was still subzero.  I was lucky enough too ride a further two laps in the daylight but couldn’t believe how each lap was so different, the ice was churned up, there seemed to be even less rideable lines and parts of the bike we now starting to freeze. Peoples dropper saddles were sticking and our drinks bottles were turning into slushies! Quite pleased the laps were only 8 miles and 1000 feet of climbing each. We worked out the best place to be to change over the tracker after several laps of faffing and people not being in the right place. Becca was doing an amazing job providing us with hot drinks and hot food in between our laps.  Popped my lights on for lap 3 just in case but didn’t need them. Each rider had at least one minor off or a splitting of ones difference (a technical term designed by my friend Tracy Wilson) when feet went one way, and bike frame went the other due to the treacherous icy conditions. The sunset was amazing, I kept glancing over the snowy peaks having to remind myself that I was in fact racing and not on my lovely mini break. My fourth lap having got horizontal in the van for at least 90 minutes with the seat warmer on was by far the hardest, the graveyard shift…

We were so lucky with the weather even though the gas was freezing it meant no bikes to wash or mend.  Catherine and spent a few weeks pre event getting out with Kath who had not ridden much technical off road before so hats off to them both for taking the time to get enough skills and endurance embedded to allow them both to enjoy the multiple laps as much as we did.

Kirsten was taking far longer than normal on her 3rd lap and finally appeared with her big wide handlebars had struggled to stay clear of the savage Scottush gorse bushes which lacerated you and had an over the bars moment luckily landing on her head on very soft ground but still enough to shake you up. She is a tough cookie our Kirsten but was complaining of feeling sick but think that was the chips she had before she set off rather than the trauma to her head!! We kept a close eye on her as she had a little sleep doing her finest purple slug impression in her sleeping bag snuggled up to the chimnea. Kath and Catherine meanwhile were coming in looking fresh, refuelling and layering up well, giving mind and body time to recharge ready for the next lap. None of us really knew how many would laps we would have to do but it now looked like five or more. My last lap was a 7am start the sun was nearly up, the skies were clear, it was sleeting and the snow was glistening under the beam of the R8 lamping beam truly magical.  My legs were really tired but got my race head back on for the climbs and this final lap.

Throughout the race friends and family had been watching our position within the female teams and we knew we were in fourth currently but very near to 3rd. Kath rode her fifth lap as it just started to drizzle and we knew that when she got in Catherine would not have time to ride her fifth lap so we called it today with everyones bodys  and bikes pretty much in tact, GREAT WORK TEAM RUN BIKE FUN

124 miles and over 20,000 feet of climbing and a fine T-shirt each, job done finishing with only a few bruises and lots of smiles all round

We are looking at re-booking the farmhouse I’m getting a team entries when the rest goes live on July 4. If you like doing stuff as a team and fancy a change of scene in January and travelling to a particular stunning part of the country and get this on your rest calendar for sure

Massive thanks to all the team who made one of the best events I have ever done!  See you in 2020 x 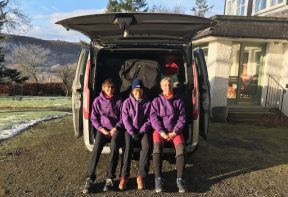 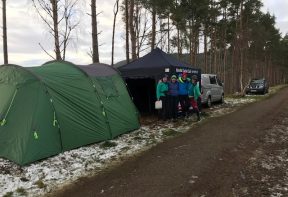 Start of the lap 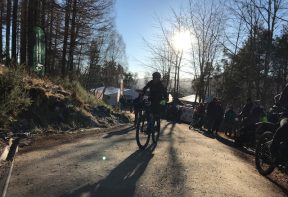 How to keep you feet warm on a 24hr freezing event 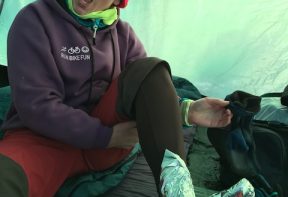 Getting ready for lap 2 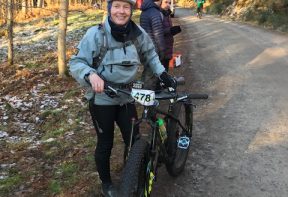 Toasting your ass to warm up 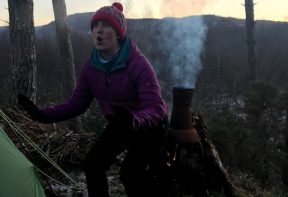 Vans and tents lit up in the forest 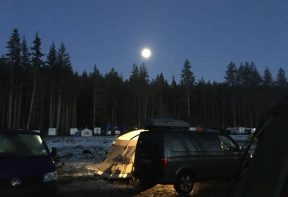 I need a dry robe… 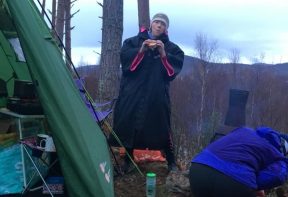